This article was originally posted on Columbia News and was written by Kim Brockway. 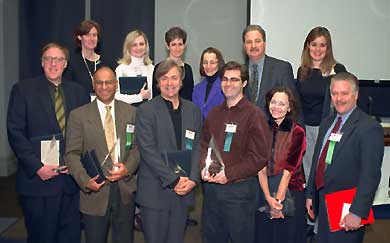 The winners of the inaugural Online Journalism Awards (OJAs) have been announced by the Online News Association (ONA) and the Columbia Graduate School of Journalism. The prizes were presented in front of more than 150 journalists gathered for the first national conference of the ONA. The awards ceremony on December 1, 2000, featured veteran journalist Kurt Andersen, co-founder of Inside.com, who spoke about the dynamic and dangerous new media landscape.

The contest, which honors excellence in Internet journalism, drew more than 600 entries from over 200 English-language media outlets around the world and was judged by a team of distinguished journalists. Find a list of the winners and finalists here.

Salon and MSNBC.com won for general excellence — Salon for a site original to the Web and MSNBC.com for a site done in partnership with another medium. Other winners included ABCNews.com, APBNews, Associated Press, Babycenter.com, CNET News.com, Cleveland Live, The New York Times on The Web, Oxygen.com, and TimesUnion.com.

Salon was also the winner in the category of enterprise journalism original to the Web, making it the only site to win two prizes. For enterprise journalism done in collaboration, the judges named co-winners, The Associated Press (for coverage of the killing of Korean civilians by the American military during the Korean War), and The New York Times (for a series on race relations on the Web).

“This marks the first time that such an ambitious contest has been held for Web journalism, and we are pleased that Columbia was able to help set the standards in this new medium,” said Tom Goldstein, dean of the school and co-chair of the OJA judges.

Rich Jaroslovsky, president of ONA, co-chair of the judges and managing editor of The Wall Street Journal Online, said: “One of ONA’s major goals is to recognize and honor journalistic excellence, and it’s truly gratifying to see just how much tremendous work is being done online. Choosing the best from among this group was a difficult task — but it’s in all of our interests, and the public’s, to set a high standard for this new medium.”

“We were impressed by the breadth and range of the stories entered in the contest,” said Sreenath Sreenivasan, administrator of the awards and a professor of new media at the school. “The selection process was extremely rigorous, and we have a showcase of the very best in recent Web journalism,” he added.

“The more we honor excellence and achievement on the Web, the more we help set a high standard so that people will come to trust and value Internet journalism,” said Jacqueline Leo, vice president and editorial director, Meredith Interactive and an OJA judge.

A two-step process was used to determine the finalists and the winners. First, a group of about 100 international journalists, working remotely, screened and narrowed the dozens of entries per category to five. These entries were then reviewed by the OJA judges– 11 journalists with extensive experience in new and old media — who met at Columbia on Oct. 27 to pick the finalists and the winners.

The co-chairs of the ONA awards committee which coordinated the contest for ONA are Lynn Povich, managing editor of East Coast programming for MSNBC and Jamie Heller, editor-at-large of TheStreet.com, who were neither screeners nor judges this year. The awards ceremony was organized by ONA conference chair MJ Bear, VP online, NPR.

The Online Journalism Awards, or OJAs as they are known, join several other prestigious media awards administered by Columbia, including the Pulitzer Prizes, the National Magazine Awards and the Alfred I. duPont-Columbia University Awards for broadcast journalism.