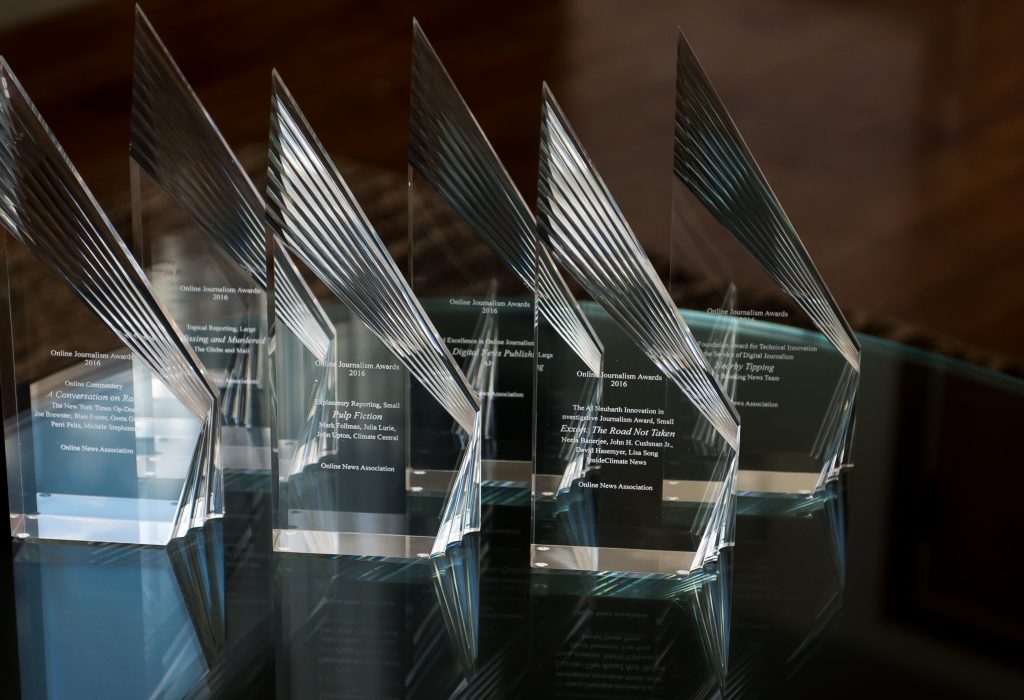 At the 16th annual awards dinner, emceed by NPR’s Al Letson, The Texas Tribune, Quartz, AJ+ Digital News Publishing and The New York Times each took home a $3,000 General Excellence Award, courtesy of the Gannett Foundation. The $15,000 University of Florida Awards for Investigative Data Journalism were won by The Intercept’s “The Drone Papers” and The Orlando Sentinel for “Focus on Force: An Investigation In Use of Force by the Orlando Police Department.” The Panama Papers, an exhaustive examination by over 100 media outlets of secretive offshore companies, led by The Center for Public Integrity’s International Consortium of Investigative Journalists, took top honors in the Investigative category.

The Knight Award for Public Service, with a $5,000 prize from the Knight Foundation, went to The Huffington Post for “Prisons Reporting.” Breaking News won the $5,000 Gannett Technical Innovation in the Service of Digital Journalism Award for its news tip-sharing app, “Nearby Tipping.” Oregon Public Broadcasting and The New York Times dominated the Breaking News categories and New York Magazine was honored in the Large Feature category for its bold, compelling presentation of “Cosby: The Women.”

ONA also named documentary photographer and freelance photojournalist Sima Diab the recipient of the 2016 James Foley Award for Conflict Reporting for her unflinching coverage of the lives and living conditions of Arabs around the world. Journalist and teacher Steve Buttry was honored with the 2016 Rich Jaroslovsky Founder Award for his longtime work in digital media, including innovations in social and community engagement.

Gannett Foundation Award for Technical Innovation in the Service of Digital Journalism
Nearby Tipping, Breaking News

Explanatory Reporting, Medium
The Price of Admission, The Texas Tribune and REVEAL, from the Center for Investigative Reporting

Topical Reporting, Large (tie)
Missing and Murdered, The Globe and Mail
The County, The Guardian US

Online Commentary
A Conversation on Race, The New York Times

Feature, Small
The Harbor: This Waianae Homeless Camp Is Not What You’d Expect, Honolulu Civil Beat

Pro-Am Student Award
Out of the Shadows, UBC Graduate School of Journalism

The University of Florida Award for Investigative Data Journalism, Small/Medium
The Drone Papers, The Intercept

The University of Florida Award for Investigative Data Journalism, Large
Focus on Force: An Investigation In Use of Force by the Orlando Police Department, Orlando Sentinel

The awards ceremony, which was live-streamed directly from the Hyatt Regency Convention Center in Denver, will be available for viewing within 48 hours here.

A group of 76 industry-leading journalists and new media professionals, led by ONA Board member and OJA Chair David Smydra, teamed up to screen entrants and select finalists. Twenty judges, representing a diverse cross-section of the industry, then conferred to determine winners from independent, community, nonprofit, major media, start-up and international news sites.

Launched in 2000, the OJAs are administered by ONA and are the only comprehensive set of journalism prizes honoring excellence in digital journalism, focusing on independent, community, nonprofit, major media and international news sites.

About the Gannett Foundation
The Gannett Foundation is a corporate foundation sponsored by Gannett Co., Inc. whose mission is to invest in the future of the communities in which Gannett does business, and in the future of our industry. It supports projects that take a creative approach to fundamental issues such as education and neighborhood improvement, economic development, youth development, community problem-solving, assistance to disadvantaged people, environmental conservation and cultural enrichment.

About the University of Florida College of Journalism and Communications
The University of Florida College of Journalism and Communications is driving innovation and engagement across the disciplines of advertising, journalism, public relations and telecommunication. The strength of its programs, faculty, students and alumni — in research and in practice — has earned the college ongoing recognition as one of the best in the nation among its peers. The college offers bachelor’s, master’s and doctoral degrees and certificates, both online and on campus. The college’s strength is drawn from both academic rigor and experiential learning. CJC students have the opportunity to gain practical experience in the Innovation News Center, which generates content across multiple platforms, and a strategic communication agency with expertise in targeting messages to millennial audiences. The college includes seven broadcast and digital media properties and the nation’s only chair in public interest communications.

For more information, contact: The Online News Association at awards@journalists.org.