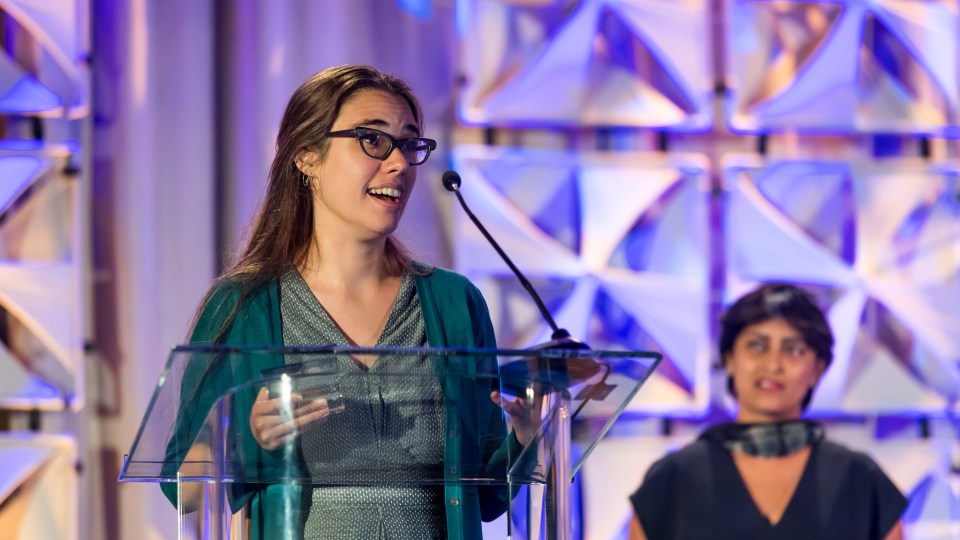 Inaugural ONA Community Award winner Erika Owens recently chatted with Shazna Nessa, ONA Board Secretary and Global Head of Visuals at The Wall Street Journal, about career paths where journalism meets technology, community building and the industry challenges she is excited to work on.

We created the ONA Community Award to recognize individuals or a small team that has made outsized contributions, often behind the scenes, to the digital journalism industry. Erika was honored at the 2018 Online Journalism Awards for her work supporting developers, designers and journalists, including as Director of OpenNews.

This interview has been edited for length and clarity. Nominations for the 2019 ONA Community Award are open through July 24.

Shazna: How did you get involved in journalism and did your previous career help inform your current work leading Open News?

Erika: I wrote a lot during college and also worked at a software development company. I later joined a small, nonprofit news organization focused on education called The Philadelphia Public School Notebook. At the Notebook I was able to combine my interests in editorial and technology. I worked on the website backend using Drupal! That got me into the open source community and I went on to co-found a Hacks/Hackers chapter in Philadelphia with Dana Bauer, where I met more folks who were as interested as I was in the intersection of journalism and tech.

The throughline with all of the work I’ve done is the importance of community and human relationships. It is still amazing to me how simple of a concept it is, and yet everything does come back to people and how we treat each other. The thing I am most proud of from my time at the Notebook is the community that gathered in the comments section of our website and how we helped connect them with one another. The intention to develop, support and sustain relationships between community members has carried through as a part of my work at OpenNews as well.

What are the big themes that emerged from the most recent SRCCON event?

People want to take action. The crowd at SRCCON is full of people who want to see journalism leadership function differently and who are working to make that a reality from a variety of positions in and near newsrooms. Sessions got into questions like: How do you lead when that’s not in your job title? and the many aspects of that question, including what it means for allies to take on the work to change newsrooms, how to work against parachute journalism, how to push back against systems embedded in technology and what it means once you do have the title.

We asked facilitators what they hoped attendees would feel in their sessions and overwhelmingly they said “empowered.” And as conversations took shape over the two days, people got the chance to talk with other people facing similar challenges, feel less alone and plot out the actions they would like to take themselves, and that they need to see the industry take as well. Some of those insights were shared on Twitter with the #JournalismBreakups hashtag, started by Sydette Harry and Cordelia Yu.

My colleague Ryan Pitts ran the programming this year and summarized the themes that jumped out at him, which were future-oriented, concrete and community-focused. Kai Teoh, a journalist and developer at Newsday, highlighted the theme of asking for help when you need it. We’ve long known how generous this community is with one another, but like Kai mentions, I really felt a renewed call for ways we can both give and get support.

What’s a common challenge coders in newsrooms experience that you’re excited to solve?

There is a lack of a defined career path, which relates to so many other issues both for coders but also for the industry overall. Our News Nerd Survey has helped us understand what the  barriers are, and how they differ between types and sizes of news organizations. There are training and mentorship gaps, especially for smaller and less well-resourced organizations, where news nerds get support outside their newsroom because there aren’t internal teams to support them.

Newsroom coders are in a unique position. This community understands both the technical landscape of where journalism is heading as well as the cultural shifts needed to better serve our audiences. I’m excited to help strengthen these career paths and create possibilities, especially for journalists from marginalized backgrounds, to stay in the field and to move into leadership positions and have the power to make change.

You have a lot of experience in building inclusive events and communities. What advice would you share with someone who is just starting out in a community building or engagement role?

When our team was organizing the first SRCCON, we were all bringing experiences from different communities and the many events we had attended. We also talked to others with different backgrounds to get their perspective. I learned a lot from community organizing groups that I’ve been involved in, as well as formal training in facilitation; for example, with Training for Change. Some of the ideas came from the open source tech community, Aspiration Tech and intentionally inclusive events like AdaCamps and Open Source Bridge.

After that initial information and experience gathering phase, it really comes down to trusting yourself. You can gather all of these inputs and interpret what could be a great way to include more people in a space. You can do something you haven’t seen in a space like the one you’re in before, but that you’ve seen elsewhere (and people might love it!). And, you can iterate and change it up next time. Building trust with yourself and with your community and between members of the community comes back to asking questions, listening and acting on what you see and hear.