Winners include The Washington Post, The Marshall Project and Reveal from the Center for Investigative Reporting 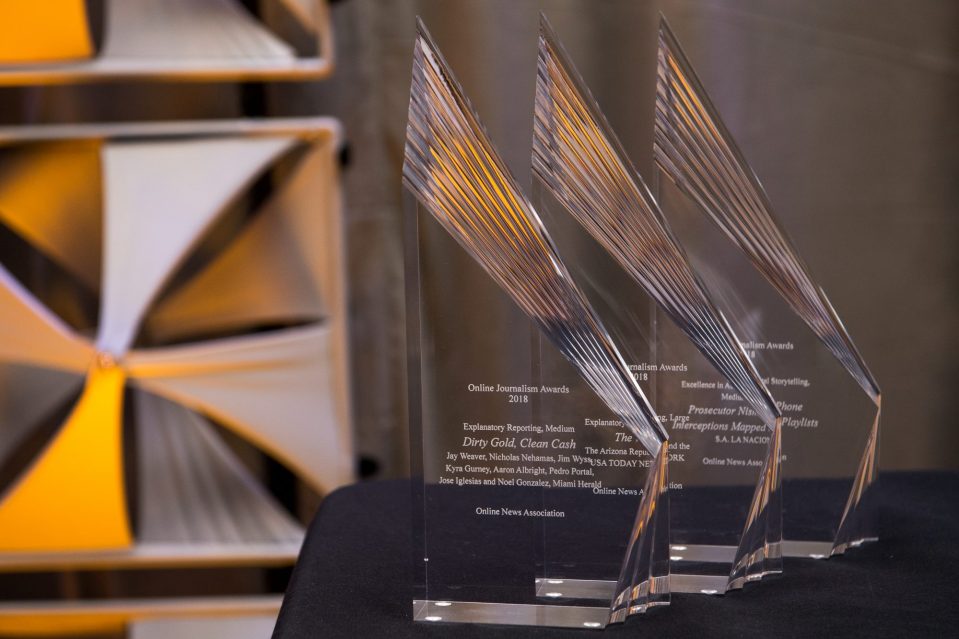 A small selection of the awards to be handed out during the 2018 Online Journalism Awards at the JW Marriott Austin on September 15, 2018, in Austin, TX. (Photo by Anya Semenoff for the Online News Association)

At the 18th annual awards dinner, The Marshall Project, ProPublica and The Washington Post each took home a $5,000 General Excellence in Online Journalism award, courtesy of the Gannett Foundation. The Trace and Postdata.club were named winners of the new Micro newsroom category of the General Excellence award, sponsored by the Democracy Fund. The $15,000 University of Florida Awards for Investigative Data Journalism were won by ProPublica and The Florida Times-Union’s “Walking While Black” and The Guardian US for “Bussed Out: How America Moves its Homeless.”

The Knight Award for Public Service, with a $5,000 prize from the John S. and James L. Knight Foundation, went to Reveal from The Center for Investigative Reporting for “All Work. No Pay.” Trint won the $5,000 Gannett Foundation Award for Technical Innovation in the Service of Digital Journalism for its automated transcription tool. KUT Austin, Miami Herald and The New York Times were recognized in the Breaking News categories.

Two new award categories were added this year. The award for Excellence in Collaboration and Partnerships recognizes newsrooms and companies who have formed partnerships or collaborations to cover a topic or story with a digital focus. AJ+ Español, Animal Político and Pop-Up Newsroom shared the Excellence in Collaboration and Partnerships award for their impressive reporting in “Verificado 2018.” The ONA Community Award celebrates an individual whose contributions have transformed digital journalism, particularly by creating the kind of environment that inspires and enables journalists to do their best work. OpenNews Director Erika Owens is the inaugural recipient of the ONA Community Award.

ONA also honored documentary photographer and freelance photojournalist Nicole Tung as the recipient of the 2018 James Foley Award for Conflict Reporting for her powerful coverage of social issues and conflict in the Middle East, Asia and Africa, and her work as a dedicated advocate for freelancers’ rights and safety. Former ONA Executive Director Jane McDonnell was honored with the 2018 Rich Jaroslovsky Founder Award for her outstanding leadership, commitment to promoting excellence in digital journalism and dedication to the Online News Association.

The event was emceed by host of NPR Illinois’ The 21st, Niala Boodhou, along with several special presenters. In total, 35 awards were given out, with prize money totalling $58,500.

Here are the winners in each category:

Knight Award for Public Service
All Work. No Pay., Reveal from The Center for Investigative Reporting

Feature, Small Newsroom
Californians: Here’s Why Your Housing Costs Are So High, CALmatters

The University of Florida Award for Investigative Data Journalism, Small/Medium Newsroom
Walking While Black, The Florida Times-Union and ProPublica

The University of Florida Award for Investigative Data Journalism, Large Newsroom
Bussed Out: How America Moves its Homeless, The Guardian US

The awards ceremony, which was live-streamed directly from the JW Marriott Austin, is available at awards.journalists.org/live.

A group of 132 industry-leading journalists and new media professionals, led by ONA Board members and OJA Co-Chairs P. Kim Bui and David Smydra, teamed up to screen entrants and select finalists. Over 25 judges, representing a diverse cross-section of the industry, then conferred to determine winners from independent, community, nonprofit, major media, start-up and international news sites.

Launched in 2000, the OJAs are administered by ONA and are the only comprehensive set of journalism prizes honoring excellence in digital journalism, focusing on independent, community, nonprofit, major media and international news sites.

Knight Foundation is a national foundation with strong local roots. We invest in journalism, in the arts, and in the success of cities where brothers John S. and James L. Knight once published newspapers. Our goal is to foster informed and engaged communities, which we believe are essential for a healthy democracy. For more, visit knightfoundation.org.

About the Gannett Foundation

The Gannett Foundation is a corporate foundation sponsored by Gannett Co., Inc. whose mission is to invest in the future of the communities in which Gannett does business, and in the future of our industry. It supports projects that take a creative approach to fundamental issues such as education and neighborhood improvement, economic development, youth development, community problem-solving, assistance to disadvantaged people, environmental conservation and cultural enrichment.

About the University of Florida College of Journalism and Communications

The University of Florida College of Journalism and Communications is driving innovation and engagement across the disciplines of advertising, journalism, public relations and telecommunication. The strength of its programs, faculty, students and alumni — in research and in practice — has earned the college ongoing recognition as one of the best in the nation among its peers. The college offers bachelor’s, master’s and doctoral degrees and certificates, both online and on campus. The college’s strength is drawn from both academic rigor and experiential learning. The college includes seven broadcast and digital media properties and the nation’s only chair in public interest communications.

Journalism 360 is a global network of storytellers accelerating the understanding and production of immersive journalism. Our mission is to help news organizations, journalists, technologists, content creators and journalism educators experiment with all forms of immersive storytelling, including but not limited to 360 video, augmented reality, virtual reality and mixed reality. Its founding partners are the Knight Foundation, Google News Initiative and the Online News Association.

The Democracy Fund invests in social entrepreneurs working to ensure that our political system is responsive to the public and able to meet the greatest challenges facing our nation. To learn more visit DemocracyFund.org.