The Police in Chile Are Blinding Protesters

One number stood out: the high incidence of severe eye injuries among protesters from the use of “non-lethal” projectiles — bullets that are supposed to be aimed below the waist, according to the U.N. Geneva Protocol.

When Brent McDonald, a New York Times video correspondent, arrived in Chile in late October 2019, doctors and human rights workers were alarmed at the rising toll, which had already exceeded those of similar attacks by the police against protests elsewhere around the world: France, Kashmir, Palestine. None had comparable numbers. To date, more than 450 Chileans have suffered severe eye injuries, mostly from rubber bullets and tear gas canisters fired by the police. Many of the victims have been blinded, some in both eyes. 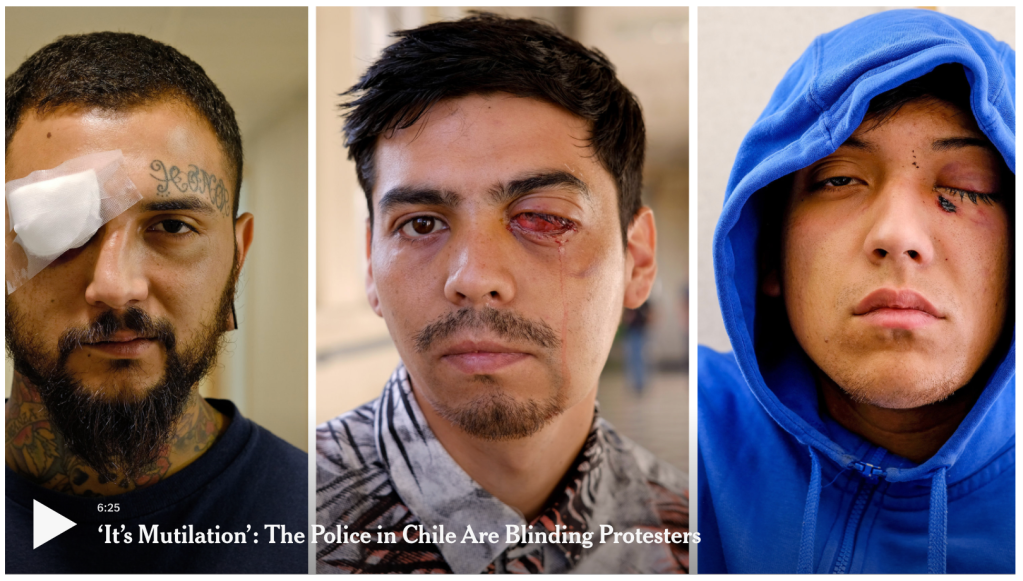 McDonald and his team spent two days inside the eye trauma unit of the public hospital that was tending to protesters shot in the eye by the police. They spoke with over a dozen victims who recounted how police officers took aim at their head. And they filmed ophthalmologists working around the clock to address the soaring number of cases, which left many victims disfigured for life. “The eyeball just opens like a flower,” one doctor said, describing the damage she struggled to repair in numerous cases.

Our team filmed indiscriminate firing of buckshot and rubber bullets by the police amid the protests, and then pressed Chilean police and the government of President Sebastián Piñera for answers. We asked why so many protesters were being shot in the eye, and whether there would be an investigation into the alleged abuses. The government denied any wrongdoing, and insisted that security forces were abiding by protocols. What we documented with our cameras, however, showed otherwise.