Award
Award for Technical Innovation in the Service of Digital Journalism

It harnesses technology and data science to produce interactive lookups. Just minutes after important votes in Parliament, users can enter their postcode and check how their MP voted on the most pressing political issues of our time.

Since December 2018, Vote Coder has produced 23 lookups which have been viewed over 19 million times.

Some of these lookups have been used live on the BBC News channel, as factchecking tools during interviews with MPs, and to explain confusing votes to viewers.

But Vote Coder doesn’t just provide a public service for audiences, it automatically spots errors in Parliament’s own data too, something we think makes our lookups as accurate as possible.

Vote Coder will continue to provide audiences with fast, accurate information about their MP’s voting record for the foreseeable future.

Vote Coder is a computer program that monitors, downloads and analyses parliamentary votes. It powers our interactive lookups, which are published within minutes of important votes in Parliament.

All the audience has to do is enter their postcode to check how their MP voted. Lookups from other news outlets often require users to know their constituency or the name of their MP to find out which way they voted, making them less accessible to people who aren’t politics fans. That’s why our lookups were especially important for reaching audiences who are less engaged with what’s going on in Parliament. 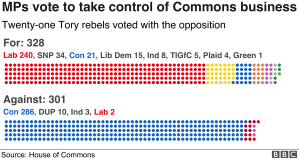 When several related votes happen on the same day, users can scroll down to see their MP’s voting record across every motion.

Vote Coder also drives visualisations that accompany our lookups, showing how MPs lined up for or against a motion in an easy-to-read format.

The first challenge in building Vote Coder was finding a data source.

At the time, the fastest and most reliable source of MPs’ voting data was a mobile app developed by Parliament. With approval, we accessed the app’s communications with Parliament’s database to find out where it pulls data from.

We wrote code to access the database directly, bypassing the app altogether. 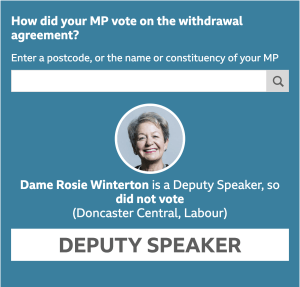 Vote Coder checks Parliament’s database for new vote results every ten seconds. It lives on the Cloud, so it can run 24/7 without interruptions.

As soon as new results are out, our code downloads and processes them. Journalists are alerted through an instant message sent straight to their phones. From there, it only takes a few clicks to publish an interactive lookup online.

The code automatically finds mistakes in Parliament’s data and alerts our journalists when this happens. To build this feature, we needed to learn a lot about parliamentary procedure and all its quirks.

Sometimes votes are counted up incorrectly. This year, our code has discovered counting mistakes in around 10% of vote results.

We highlight counting mistakes and unusual behaviour like double-voting to the audience. This means our coverage of important votes is always reliable.