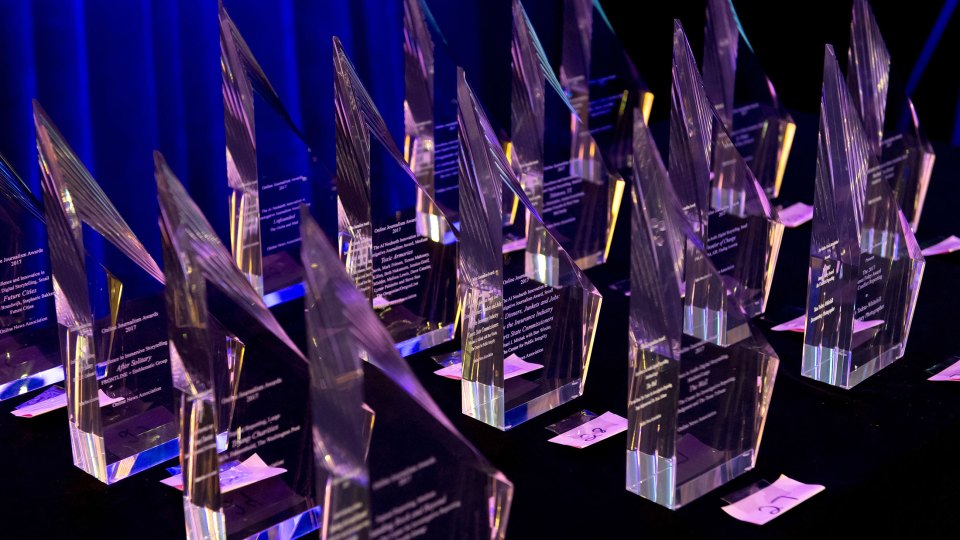 A new batch of these trophies are up for grabs in the 2021 Online Journalism Awards.

Winners were announced online and during a ceremony in Philadelphia, where ONA reconnected the journalism community at the association’s first in-person conference in two years. The Lenfest Institute for Journalism provided support to host the 2021 OJAs reception and ceremony.

Special guests included Gina Chua, Executive Editor of Reuters, who was honored as the inaugural recipient of the Impact Award for her dedication to innovation in visual storytelling and steadfast commitment to mentor journalists and address structural issues in the industry. Selected by the ONA Board of Directors, the Impact Award recognizes trailblazing individuals who have made a substantial impact on the industry, regardless of their tenure in journalism or involvement with ONA.

Five honors in the 2021 OJAs come with a total of $40,000 in prize money. PublicSource, Grist, ProPublica and The New York Times each received a $5,000 prize for the General Excellence in Online Journalism award, supported by SmartNews. The Topical Reporting: Climate Change award went to Grist, with a $5,000 prize courtesy of McKinsey Publishing.

The 2021 Knight Award for Public Service—with a $5,000 prize supported by the John S. and James L. Knight Foundation—honored THE CITY for their project “Missing Them,” a local accountability project to track down and memorialize people who died due to Covid-19 in New York City.

The Gather Award in Engaged Journalism comes with $2,500 prizes for each of the two subcategories, thanks to the University of Oregon School of Journalism and Communications. El Tímpano earned recognition in the Micro/Small Newsrooms subcategory for their community-powered coverage of the Covid-19 pandemic, and Anchorage Daily News in collaboration with ProPublica are the winners in the Overall Excellence subcategory for their project “Unheard,” bringing to light the stories of survivors of sexual violence in Alaska.

Here is the full list of the 2021 Online Journalism Awards winners in 21 categories that were open for submissions:

Excellence and Innovation in Visual Digital Storytelling, Large Newsroom
The Globe and Mail