Fifteen months after their son died, Javier and Maritza Ambler sat at a conference table at their attorney’s office to talk with a reporter. The grieving parents only knew that Javier Ambler II, a 40-year-old Black father, had died in the custody of the Williamson County sheriff’s office. Austin journalist Tony Plohetski was the first to tell them the horrific details: Ambler had begged for his life, crying “save me” as deputies repeatedly Tased him — all while reality TV crews filmed. The parents sat in stunned silence.

A troubling tip about Ambler’s death had landed on Plohetski’s desk in February 2020. More than a year before the nation’s attention turned to the death of George Floyd, Ambler screamed “I can’t breathe!” as he died at the hands of deputies in March 2019. The millionaire, celebrity-seeking Williamson County sheriff, Robert Chody, had done his best to keep the incident under wraps. But Plohetski knew there was an important truth behind that tip. So he dug and fought for information and eventually exposed both the details of Ambler’s brutal death and a policing culture that glorified violence — often for the sake of a television show — that had been meted out on dozens of people, a disproportionate number of them Black. 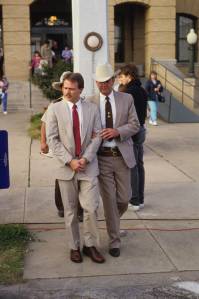 None of this would have been known but for our months-long rolling investigation into one of the state’s most notorious tough-on-crime counties. It culminated in an indictment against the once-untouchable sheriff for his alleged involvement in destroying “Live PD” footage of Ambler’s death. Informed by Plohetski’s reporting, county voters ousted the sheriff in November 2020. The highly-rated TV show, which was criticized for deleting crucial video and exploiting suspects, was canceled. Texas lawmakers have now imposed a ban through the Javier Ambler Law on commercial production crews partnering with police to create reality television. Our spotlight on Ambler’s death spurred action on a dormant investigation into the conduct of the deputies who Tased Ambler, resulting in manslaughter charges against them in March 2021. And we told Ambler’s grieving parents, who had been searching fruitlessly for answers, the truth about what happened to their son.