It is a huge responsibility to cover severe weather, and never is that more apparent than when a tornado touches down. On March 21, 2022, the KXAN team provided critical information as six tornadoes formed in our Central Texas viewing area (and 31 total statewide). This rare and significant event became Texas’ fourth-biggest one-day tornado outbreak since record keeping began in 1950. Fortunately, no one in our area died — but hundreds of homes and businesses were damaged, and one of the tornadoes carved an eerily similar path to a deadly EF-5 that hit Jarrell, Texas in 1997.

Within 72 hours after the tornado outbreak, KXAN produced 34 stories as part of multiple phases: Early warning and preparation, live and up-to-the-second coverage during the event and coverage of the aftermath. 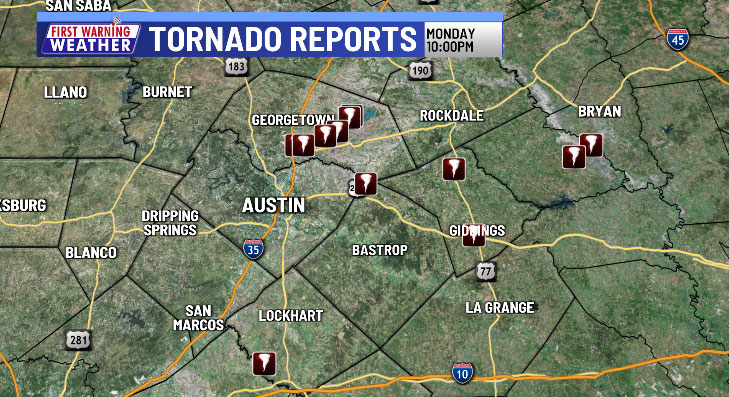 We’ve found a live blog is one of the best ways to provide quick updates to our viewers. It launched ahead of the storm and provided updates on school closures and event cancelations, and once the National Weather Service issued a severe thunderstorm warning, we sprang into action with a live stream and live updates. The stream, which was hosted in this story and on our Facebook page and news app, let people know immediately if they needed to seek shelter (snippets of the stream are in a few of the attached links). Using weather models and live cameras, our weather team guided people through the storm as it rapidly developed – they even confirmed tornado touchdowns before the NWS issued warnings, and captured a tornado live as it crossed over an interstate overpass.

During and in the immediate aftermath of the storm, we worked to break out story lines and information. On the first day, that effort included video and photos of the tornado as it passed through Williamson County. On day two, we gathered together some of the best visuals into an interactive timeline, so people could understand the breadth of the damage. We also spoke to those who were affected – those who sheltered, survived and began rebuilding in Round Rock. We were also the first to track down the infamous red truck caught on video driving through the tornado and rolling over, only to right itself and drive off. Later in the week (outside of the 72 hours) we spoke to the teen driver.

Days like this remind us of why we do what we do and how important it is to get correct, quality information to our viewers as soon as possible. Our coverage garnered more than a million pageviews that first day and thousands of views and engagement on social media, which speaks to how many people rely on us as they make decisions about their safety.