Four hundred years after the first enslaved Africans were brought to the colony of Virginia, most Americans remain woefully unaware of slavery’s centrality to the founding of their country, or of its persistent legacy in contemporary society. Last August, The New York Times Magazine launched The 1619 Project, commemorating the 400th anniversary of the start of American slavery. The 1619 Project was multimedia editorial initiative that cataloged the legacy of slavery in contemporary American society, as well as the contributions of black Americans in actualizing this country’s founding ideals of democracy, liberty and equality. It has sparked a long-overdue reckoning with how the story of America is told, and has radically reframed how millions of Americans understand their own history. 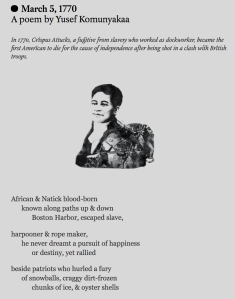 Published as a special issue, The 1619 Project includes eleven essays that reveal how slavery has affected key facets of contemporary America, including modern capitalism, health care, the prison system, music, sugar, even rush-hour traffic. Nikole Hannah-Jones, a staff writer at the magazine and the project’s creator, powerfully shows how slavery belied America’s founding ideals of liberty and equality, and how black Americans fought for those ideals.

The other essays, written by eminent journalists and scholars, expounded on slavery’s deep and continuing impact. Jeneen Interlandi attributed America’s lack of universal health care to racist policies enacted after the Civil War. Jamelle Bouie wrote that slavery’s vestiges have left our political system unrepresentative of its citizens. Bryan Stevenson wrote that slavery left Americans with a fear of black people and a taste for violent punishment that define our criminal justice system even today. The project meticulously and exhaustively showed just how inextricable slavery is from modern American life.

Alongside the essays were 17 literary works by contemporary black writers that brought to life key moments in American history. These works were all created for The 1619 Project, commemorating events including the Middle Passage, the New Orleans massacre of 1866, the Tuskegee syphilis experiment and the birth of hip-hop. Stitched together, they offer a literary timeline of black life in America over the last four centuries.

A crucial facet of the 1619 Project was the 1619 podcast. Released shortly after the special magazine issue of The 1619 Project was published, the 1619 podcast was a multi-episode audio series narrated by Hannah-Jones and others. This audio series helped The 1619 Project return, fittingly, to the oldest form of storytelling, transforming historical writing and essays into visceral, intimate accounts. The episodes used sound and story to bridge the past with the present. We hear an archival interview with Fountain Hughes describing what life was like after emancipation. We stand in a graveyard with a young black farmer, June Provost, as he mourns the loss of not only his father but of his land. In a powerful sonic journey, the Times culture critic Wesley Morris traces contemporary music back to some of the oldest recordings of formerly enslaved people singing songs that have been passed down for generations.