With limited turnaround time each episode offers clear-eyed analysis and fresh angles to breaking news stories reported from far-flung locations. There is good diversity of voices and audio that captures the environment. Listeners get a full, comprehensive picture of each issue being discussed.

In news, our greatest currency is the ability to unearth the facts of unfolding global events and to make sense of them for our audiences. We chose the following three episodes of The Take as examples of the breadth and diversity of our news podcast: 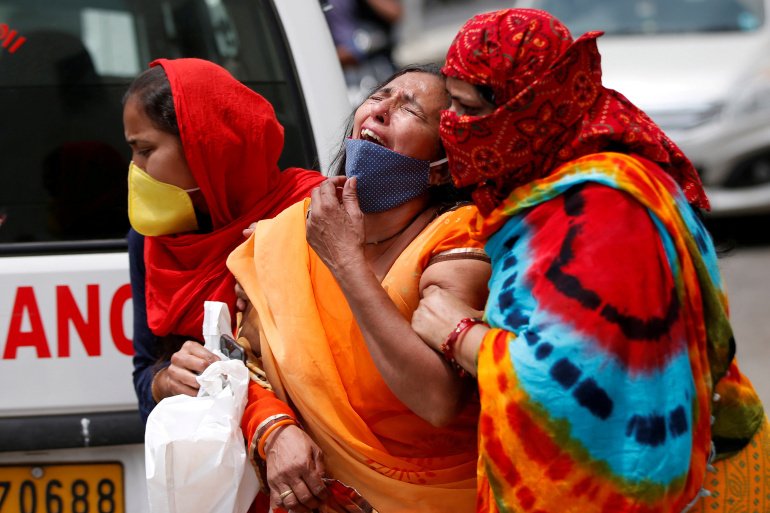 FILE PHOTO: A woman is consoled after her husband died due to the coronavirus disease (COVID-19) outside the mortuary of a COVID-19 hospital in Ahmedabad, India, April 20, 2021. REUTERS/Amit Dave/File Photo

In April, as tales of COVID-19 transmissions began flooding social media from Indians on the subcontinent who were alerting online communities of their desperate needs, our small team at The Take paid attention. Reports were starting to seep out that India’s healthcare system was increasingly overwhelmed by a devastating second wave of COVID-19, and with no end in sight. In “”On the front lines of India’s second wave of COVID-19,”” The Take draws listeners into the experiences of a dozen Indian doctors and patients as they navigate and attempt to survive the brutal health crisis and our team looked at the potetential consequences if vital medical supplies and vaccines were not swiftly furnished.

Much of the United States, and the world, was shocked over the storming of the US Capitol in Washington, DC on January 6. In “”The ignored warnings of the US Capitol insurrection,”” journalists and activists describe their experience covering and witnessing the insurrection. We hear experts analyze the contrast between the lack of police preparedness and response to Trump loyalists versus Black Lives Matter protesters a year earlier. In each instance, we asked them to consider the potential consequences of the events of January 6th and their import on the future of US democracy.

In May, during the holy month of Ramadan for Muslims, what started out as protests against forced expulsions in a Palestinian neighborhood turned into a crackdown by Israeli forces that engulfed much of occupied East Jerusalem, including holy sites like the Al-Aqsa Mosque. But Sheikh Jarrah was just one neighborhood, with displacements occurring across the occupied territories. In “”Sheikh Jarrah, Palestinians confront a city’s future,”” The Take looks at the first-person experience of a resident in the area and a journalist who has long been covering the story. As reverberations in Sheikh Jarrah spread beyond the neighborhood, we examine their effect on the future of Palestinians in Jerusalem.

The Take is made up of a small production team of ten people who are from and have lived all over the world, led by two Black American women from diverse cultural backgrounds.

The Take stands out for its deliberately global perspective and choice to cover areas of the world that typically get short shrift in English language media, also for its effort to speak directly to its audience. The show employs direct interaction between audience and host on Twitter and Instagram, frequently featuring listener voices from around the world on social, some which are also shared on the show.