This series done by CPI did a great job of showing how COVID-19 has affected this needed, but repeatedly forgotten, group of workers. The data work on this project was amazing; it must have been a massive lift to identify the people involved. This story was the ideal of what data journalism can do.

As COVID-19 spread last year, initial news reports showed that frontline workers at meat-processing plants and on U.S. farms were disproportionately infected and falling ill. In response, the Center for Public Integrity began Hidden Hardship, a deep investigation into U.S. food production’s overwhelming reliance on immigrants and foreign guestworkers. Our two-part project is about American denial of this reality, and how our immigration system effectively and unfairly keeps undocumented food workers in that vulnerable status.

During our reporting, we discovered that immigrant and foreign guest workers had succumbed to COVID-19 with no public recognition in their communities and their deaths were not reported to occupational safety officials. Others were cheated out of sick pay and deprived of virus-related financial relief if they or a spouse were undocumented. Some foreign farm guest workers that U.S. companies contracted left the country still suffering from the virus.

Our first story is a definitive look at immigrants’ role at signature regional businesses with a county-by-county interactive map built from original data analysis. Through methodical digging deep into Census data, we identified 10 industries and specific frontline occupations that put workers in those jobs at high risk of exposure to the coronavirus. We analyzed data to estimate how many workers were foreign-born and of Latino origin. We also placed spikes on the map to show where virus outbreaks were affecting food-production communities across the country.

The map and our narrative story reveal how entrenched immigrant workers are even in regions that voted for immigrant-bashing Donald Trump. We tell the story, for example, of Hall County, Georgia, where Latino immigrant workers sustain the “Poultry Capital of the World.” 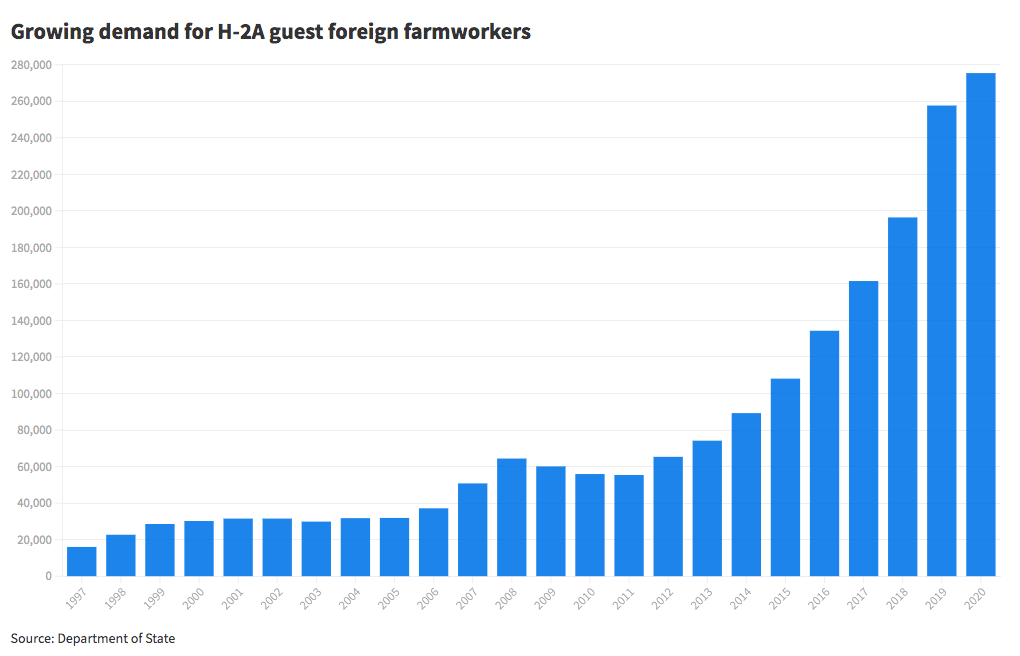 Our second story investigated business’ use of foreign farm laborers sponsored under a special seasonal visa program known as H-2A. The program has grown 155% in five years. Data we retrieved from government files illustrates this dramatic surge. Despite a pandemic border shutdown, these workers were admitted last year without adequate safety precautions. Many fell ill and some died — with no public disclosure — even as Trump planned to freeze their wages in 2021. The story spotlights a need for major reforms to reduce a gross imbalance in power between these workers and employers.