Demystifying the People Trying to Overthrow the U.S. Election

This Times Opinion series examines the forces that motivate QAnon believers, the networks that enable them to connect and share disinformation and the complexities of holding them accountable without sacrificing broader rights to privacy. The question of how people’s attention gets hijacked and weaponized has never been more contentious, or more entangled with the health and future of democracy. These three pieces interrogate the ways in which people become radicalized and subsumed by fringe ideologies.

Few media pieces have approached QAnon and its supporters in a deep, rigorous way, truly enabling readers to understand what motivates its adherents. When supporters of former President Donald Trump stormed the Capitol on Jan. 6, the stakes of the movement became clear. Times Opinion understood how essential it was to demystify the people questioning the legitimacy of the 2020 election, and the conspiracy theories posing a threat to American democracy. 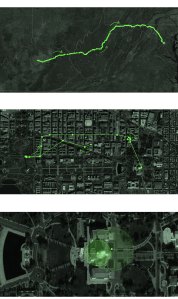 The first piece in this series is a data investigation into the digital privacy of Trump supporters as they moved around Washington during the Capitol riot. Stuart Thompson and Charlie Warzel used cell phone “pings” to demonstrate that it is possible to find and track supposedly anonymous protesters. Then they considered the political and moral consequences of doing so, using graphics, video animations and photos.

The second piece in the series is a journey into the depths of the online QAnon movement. Thompson listened in on a public chat room for weeks as QAnon believers and Trump enthusiasts swapped stories and conspiracy theories during the crucial weeks before President Biden’s inauguration. The online presentation included embedded audio clips that brought the voices of these people to life.

The third was a look at the origins of disinformation and conspiracy theory movements, exploring how followers found each other: through Facebook. Thompson and Warzel used software to scrape influencers’ post histories and track their drift toward extremism over time, as Facebook rewarded them along the way with followers, attention and community.

Collectively the three stories show the origins, organization and actions of the sect of Trump followers who are also drawn to QAnon and its outlandish beliefs.

The story tracking the cell phone pings of Capitol rioters resonated with a wide audience, who voiced alarm about its implications for privacy. Frank Figliuzzi, a retired assistant director for the F.B.I., discussed the story and the lessons it offered on “the good and bad of what our smartphones reveal.” And Yael Eisenstat, a Future of Democracy Fellow at the Berggruen Institute, wrote: “This should worry everyone…Proof that the fears of surveillance capitalism are real.” “Three Weeks Inside a Pro-Trump QAnon Chat Room” was also shared widely on social media, including by the Anti-Defamation League’s Center on Extremism vice president, by the founder of History News Network, and many more.