In this research and data work, Prodavinci evidenced how the Venezuelan State confiscated the savings of Venezuelan workers. A Venezuelan university professor contributed $16,426 to Social Security in 20 years of work. The system will pay him back just $ 281 over the next 25 years. 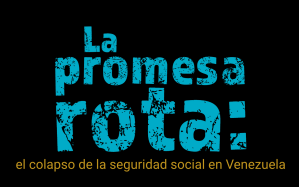 Based on criteria of equity and social justice, we collected twenty years of data on salaries of teachers, university professors and employees who earn minimum wage, to calculate how much has fallen the value of the pension and savings available to workers to live during your retirement. In addition, based on econometric methodologies, we calculate the value of the workers’ contributions to social security to find out how much of their savings was paid by the social security system. We estimated how much each pensioner did not receive and how much the State did not transfer so that the old-age pension would equal the value of the food basket. We found the following findings:

All these findings were calculated from a reconstruction of our own data, which are available on the landing page “The broken promise: the collapse of social security in Venezuela.” Due to official opacity, there is no public information available in Venezuela for any of these indicators. This work includes links to stories collected in the past on pensioners and retirees in the country, since this work is the latest project in a line of research on the elderly and social justice in the humanitarian emergency.