On Halloween 2019, the wife and 6-year-old daughter of ProPublica Deputy Managing Editor Eric Umansky were headed home after a night of trick-or-treating when they saw an unmarked police car headed the wrong way up a one-way street in Brooklyn in pursuit of several teenage boys. The car struck one of the kids, who rolled across the hood. 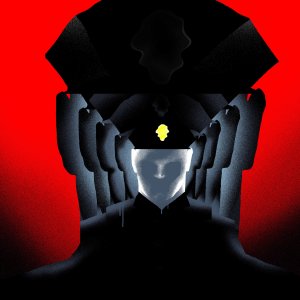 After his family returned home, Umansky went to the scene and saw police haul away three boys, ages 12 to 15, who didn’t seem connected to those who ran. Over the next four hours, Umansky waited outside the police station with the boys’ parents, who weren’t allowed to see their children. The boys were released, without explanation or charges, after midnight.

Umansky asked an NYPD spokesman for the basic facts of the incident. The official said that Umansky’s wife and daughter had not seen what they thought they saw. The car didn’t hit the kid. The kid hit the car. Or, as the spokesman put it, “One unknown male fled the scene and ran across the hood of a stationary police car.”

Umansky assigned himself to figure out a basic question: How does accountability for NYPD officers really work?

It was the start of what would turn out to be an unprecedented examination of NYPD impunity and how a veneer of civilian oversight belies the reality that America’s largest police force largely polices itself.

Umansky learned how in one year the city looked into nearly 3,000 allegations of violence and substantiated only 73, and that just nine officers suffered the most severe punishment: loss of vacation days.

Details were kept secret by 50-a, a state law that has barred the public from seeing police discipline records. But after the killing of George Floyd, nationwide calls for reform prompted New York legislators to repeal the law.

Because of his sourcing and understanding of the records, Umansky was able to quickly request and obtain a trove of them no one else had, just before unions successfully fought in court to temporarily block the city from releasing records.

The unions didn’t know that ProPublica already had much of the material.

On a Saturday afternoon, we learned that the city of New York had mentioned in court papers that ProPublica had many of the records and was working to build an online database that could be searched by readers.

We knew this work would come under intense scrutiny — from the police unions that had fought to keep the information secret, from advocates on all sides and from our fellow journalists. We worked through it all and hit the publish button less than 24 hours after we had learned that our possession of the data was public knowledge.

The database had cracked open a very heavy door. A federal judge cited our work and asked union lawyers, “Are you asking to put that particular genie back in the bottle?” Then she ruled in favor of allowing disclosure of further records.