It’s impressive how the team conceptualized telling this story, including how people flaunted the law and damaged their own beaches. They combined local on-the-ground investigations with great data visualizations on a national level, and the collaboration here is a model for future partnerships.

Hawaii prides itself on being a national leader in environmental protection. The state has aggressively pursued protections for endangered species and was the first in the country to set a goal of eliminating all fossil fuels from its power grids by 2045.

But when it comes to its world-famous beaches, Hawaii has been remarkably negligent. Despite strong coastal protections in state and county laws, officials have repeatedly granted exemptions, allowing homeowners to build seawalls and other shoreline structures that protect private property but speed the loss of beaches, a sweeping investigation by the Honolulu Star-Advertiser and ProPublica found. 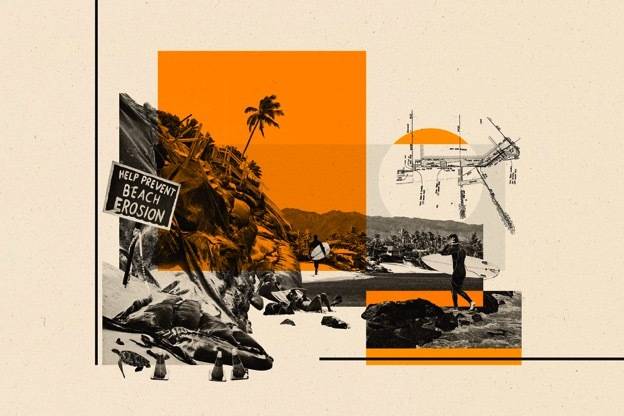 No one — not even the regulators themselves — had a complete picture of just how many seawalls officials had approved over the years, or even when permissions they had granted had expired. Stories by Star-Advertiser reporter Sophie Cocke changed that.

Beach erosion is not a new issue in Hawaii. Researchers estimate that roughly a quarter of the beaches on Oahu, Maui and Kauai have already been lost because of seawalls over the past century.

But for the better part of the last decade, Cocke, the Star-Advertiser’s political and environmental reporter, watched as the Legislature took little to no action. Year after year, legislative leaders killed bills that would tighten public shoreline protections while ordering study after study to confirm what the scientific community already knew: rising seas, brought on by climate change, pose an existential threat to coastal communities, and homeowners need to move inland, both to protect themselves and the state’s beaches.

In 2020, Cocke joined ProPublica’s Local Reporting Network and set out to examine the loopholes that have allowed seawalls to proliferate and to hold policymakers accountable for undermining their own environmental laws.

The scope and details of what she found shocked the environmental community and the state’s political establishment.

Since 1999, when the state passed a “no tolerance” policy toward new shoreline armoring, officials had granted more than 230 environmental exemptions to owners of homes, hotels and condos across Hawaii. The comprehensive picture — the first catalog of its kind — revealed how shoreline structures were concentrated on some of the state’s most sensitive and treasured coastlines, accelerating beach loss in those prized areas. It also detailed the wealthy and politically connected owners who had found favor with regulators, including Marty Nesbitt, the chairman of the Obama Foundation, and Kelly Slater, an 11-time world surfing champion.

State officials countered that they carefully policed the shorelines and had the power to terminate some of the permits at any time. But Cocke’s meticulous scrub of seawall records showed they rarely exercised that authority. Instead, officials regularly granted extensions and didn’t enforce their own deadlines for emergency measures like sandbags that were supposed to be temporary. In fact, through her reporting trips along the coasts, Cocke flagged several structures that remained on public beaches, despite expired permits. When she asked regulators about them, they told her those permits “fell through the cracks” and vowed to follow up with the owners.